How to Play Keno – Rules and Tips

Keno has the distinction of being one of the worst odds games offered in a casino. The best bet is not to play this game. However, if you are dating a girl that loves it; suck it up and bet as little as possible while still making her happy.

In Keno, 80 numbers are placed in a “hopper”. After you place your bet, you pick 1-10 numbers. 20 numbers are then drawn out of the hopper. How much you win is based on how many of your numbers are called.

There is no real strategy involved in Keno. Every number has an equal probability of being called. If you are going to play Keno, have fun and play your birthdate, your favorite number, your street address, or your number of sexual partners. Pro-tip: ‘0’ is not in the hopper.

One thing you can do to help improve your odds is to compare the payouts from location to location or online casino to online casino. Play at the one with the better statistical payouts.

The table below provides all of the Keno betting options and the payouts for each occurrence based on a $1 bet at a standard Las Vegas casino. Also included is the house edge based on the amount of numbers picked.

The house advantage, as you can see, is quite high. Other than not playing, your best bet is to play just a single number.

Below is an example of selecting 10 numbers on a standard Keno game. 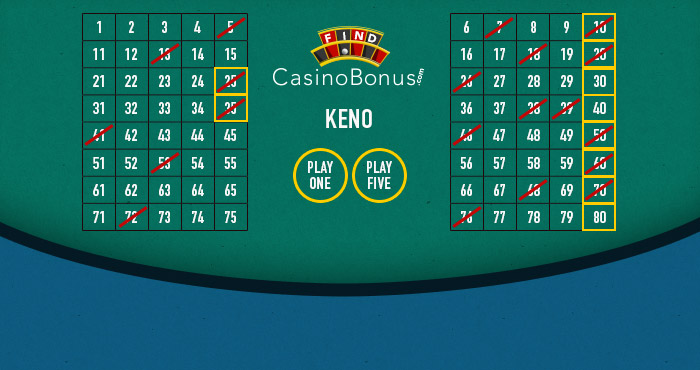 To sum it up in a single word, no. Although Bingo and Keno have some similarities, the games are completely different.

Although the origin of Keno is hazy, it is believed the first games originated in China and the proceeds were used to help build the Great Wall of China.

Since the origination of Keno, many variations of the game have emerged.

The most famous game of Keno to be played in the movies occurred in Vegas Vacation. When Clark Griswold lost all of his money, including cashing in the plane tickets home, he bet his last $2 in a game of Keno at the MGM Grand. **Spoiler Alert** Although his ticket loses, the old man who wins the jackpot dies and they collect on his winning ticket.